Halloween Parties for the Adults in the Family

Since I come from a family of Halloween fanatics, we usually spend the whole month of October celebrating. The kick off is my mom's annual Halloween party for her children (my sisters, our spouses and I).  It's an adults only gathering, so grandpa and grandparents are in charge of the grand kids while we go to party!

While this blog is typically dedicated to my own parties, I just had to feature some of the ideas and decorations that my mom has come up with since they are so amazing. It's obvious that any creativity I have came from her. In fact, if the previous posts haven't alluded to just how creative and fun she is, these pictures and ideas will confirm it. She even has her own grandma blog full of cute and creative ideas, projects, and events she has done with her grand kids. Check out her blog at www.whathappensatgrandmas.com!

My mom's Halloween parties always start after dark to achieve the full effect of scariness! The sidewalk is usually lite with pumpkin luminaries, a large plastic snake is wrapped around the porch, and the past two years there has been a note that says "went to the store quick, come on in".

As you walk into the house, creepy Halloween music is playing,candles are glowing, spider webs are heavily draped everywhere, and there is no sign of the hostess. This particular year, the dimly light living room was covered is spider web and on the table were three furry rats with glowing red eyes and a sign that read "Enjoy My Fly Infested Rat Poison" served in glow in the dark martini glasses with fly ice cubes.

But what really catches your attention is sitting in the chair behind the drink table.....


I was so impressed with this witch that she had to make an appearance at my own Halloween party that year.
There was also a table with an appetizer to munch on while we sipped our "rat poison" and waited for her return from the store.

Adjoining the living room is the dining room which is always decked out for our arrival! Battery operated candles are glowing on the table, place cards with plastic spiders, hanging skeletons, perched vultures, and black and orange streamers hang from the lighting fixture. 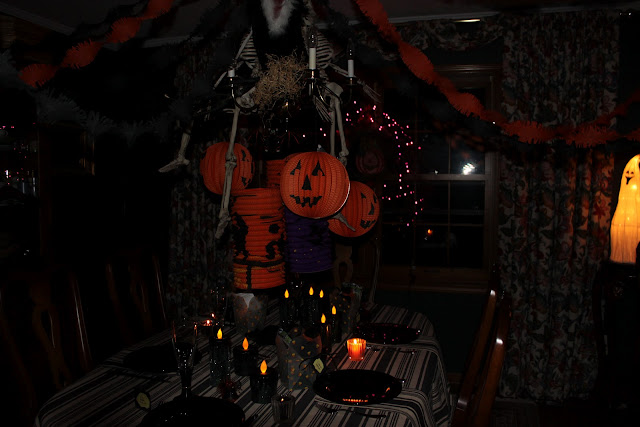 The first year the "Be right back note was posted" we drank, talked, and looked around the house to see where exactly she was or what was going on. In fact, so much time had gone by with no sign of her that we were all hungry and ready to dive into the delicious meal that was warming in the oven. We knew she was up to something, but we couldn't figure out what it was. Then finally she appeared. She was hiding under the dining room table the whole time waiting for us to sit down so she could grab our ankles and scare us. Needless to say, that plan failed. After a good laugh we all did sat down to enjoy the traditional Halloween party meal of a fall salad, BBQ ribs, Martha Stewart Macaroni and cheese, and a homemade Oreo dessert. This was all washed down with our rat poison martinis (Cranberry Stirrings and vodka) and Oberon beers (a well known and liked Michigan brewed beer).

After our bellies are full of homemade comfort food we play our family favorite game of Bingo for cash prizes! And I will just say that none of us leave disappointed. Every year my mom comes up with a different game for us. One year, as we walked through the front door we each found our name card attached to  spider web (black yarn) and had to follow it all over the house until we reached the end where a prize awaited each of us. The webs were intertwined and at least 8 feet long so the 6 of us had a blast trying to follow our web. Another year, we each found a dollar store Halloween wind up toy at our place settings  which made for some great wind up toy races where the winner was awarded a prize.

After we admire the year's decorations, eat and drink, and play a couple games we head home with our bellies stuffed, our pockets full of cash, and many good memories to last a lifetime!

In 2011, after we received another "be right back" note on the front door we grabbed our drinks and looked around for where she was hiding. This time, a monster slowly rose from behind the couch and actually scared one of us!

Posted by Mrspartyplanner at 6:43:00 PM No comments:

The twins 2nd Birthday took place "under the sea"! They LOVE the pool and beach, and since their Birthday is at the end of August I thought what a better party theme than Under the Sea! When I planned this party I didn't know about Pinterest, so I searched the internet for ideas. However, since I have discovered Pinterest, I have found many great ideas for this kind of party and would love to do this party theme again, bigger and better in the future! Within a budget of course.

We started this party inside the house with decorations and dinner for family. Everything was set up while the boys were napping, so when they came downstairs a big surprise awaited them! I wanted it to resemble the ocean, so "blue waves" greeted the boys as did blown up beach balls, colored balloons, and a big gift from grandma and grandpa. I don't want to get off topic, but the boys Birthday present was the Pottery Barn kids craft table for six and it has been one of the best and most used gifts ever! Even adults can sit on these chairs in comfort. We use this table for arts and crafts, playing games and toys, and a place to eat when their friends are over. Also, grandma had the idea of running the bubble machine inside to add to the under water effect, but I vetoed that one and we compromised to running it outside for the second part of the party.

For the waves, my idea was to cut and staple blue streamers to twine and I hung them up from the balcony to create the ocean waves. These two year olds LOVED it! I spent about 45 minutes cutting and stapling these streamers and they had them taken down in about 3 minutes, but it was worth every minute to see the excitement and happiness on their faces! 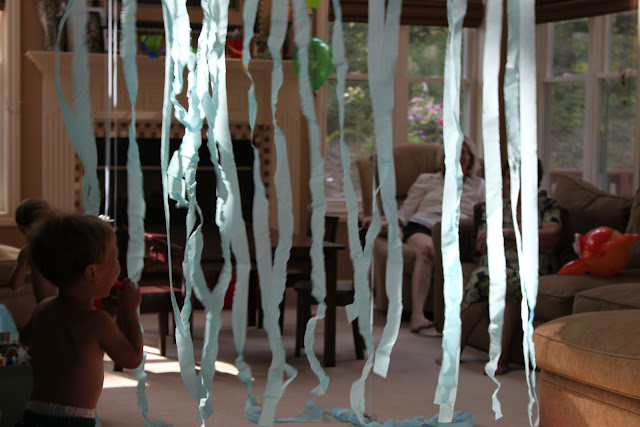 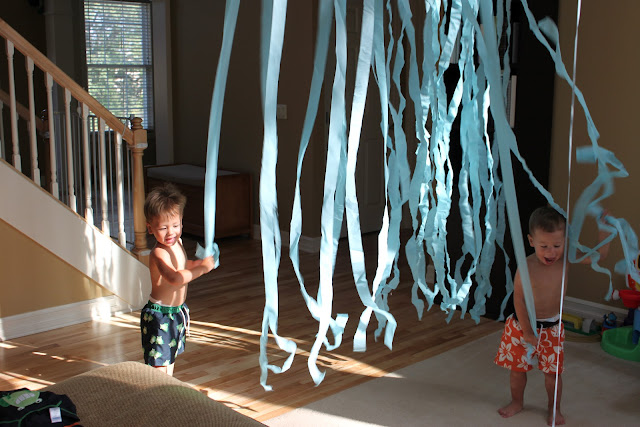 Next it was time for dinner and of course the menu needed to compliment the theme, so seafood it was! For starters, I made a warm crab dip with sour dough bread for dipping and a light salad with mozzeralla cheese, cashews, granny smith apples, Craisins, and a poppy seed vinagrette. Martha Stewart macaroni and cheese also made an apperance because it's just that good. I put my mom in charge of making the watermelon shark again since it fit the Under the Sea theme so well and she can carve it into turn perfection.

Fishing net hung from the ceiling and was adorned with seashells and starfish, which were also scattered around the food. And once again, I realize I didn't capture all the details on camera. I may need to hire a "professional" in the future.


The kids had a "fish" sandwich with ham and cheese, grapes, and veggies and dip. 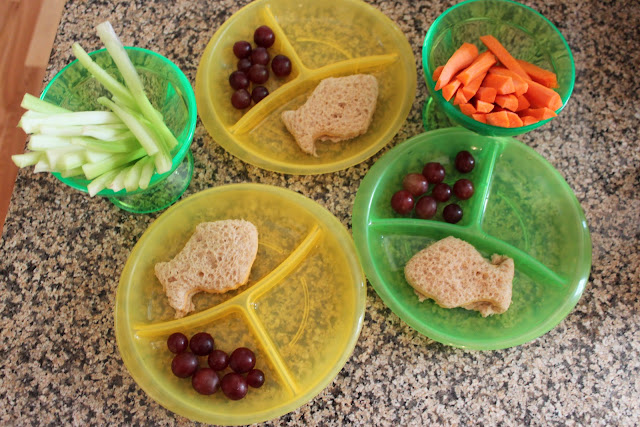 Our entree was a shrimp boil! This was a blast, easy to make and tons of fun to eat. I combined two recipes for this. There was corn on the cob, red potatoes, onion, large shrimp (60/90), hot sauce, seafood seasoning packets and seafood liquid seasoning. The only problem I found was that the pot I used was not big enough for the large amount of food I had so some pieces were very spicy while others had no spice to them. I am planning on making this again this summer for the 4th of July and will skip the seafood seasoning and make my own with hot sauce, lemon, butter, and spices. Once the shrimp boil  was cooked I drained the pot and simply poured it onto the newspaper covered table. Sides of cocktail sauce and lemon wedges were scattered around the table. 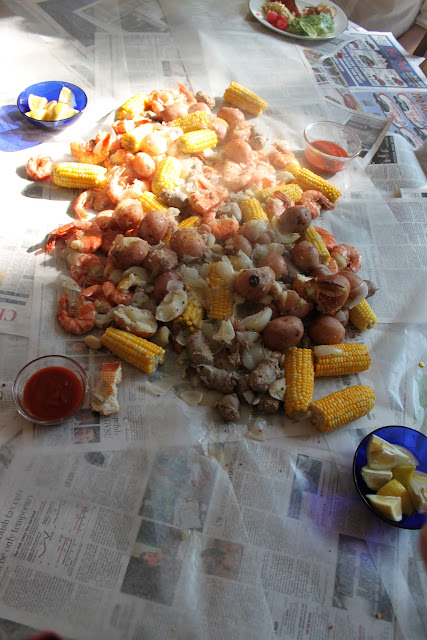 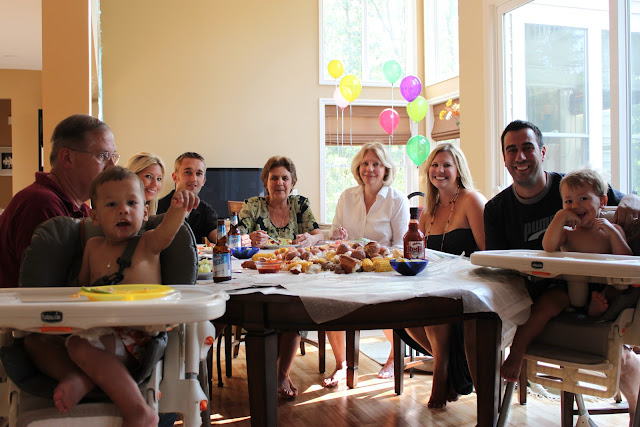 After dinner, we headed outside for dessert and playtime with family, friends, and neighbors. Thankfully, it was a hot and humid August evening, the perfect weather for our under the sea party! Desserts, drinks, snacks, bubbles, balloons, the kiddie pool, water table, and outside toys kept the young kids busy while the adults sat back and relaxed. 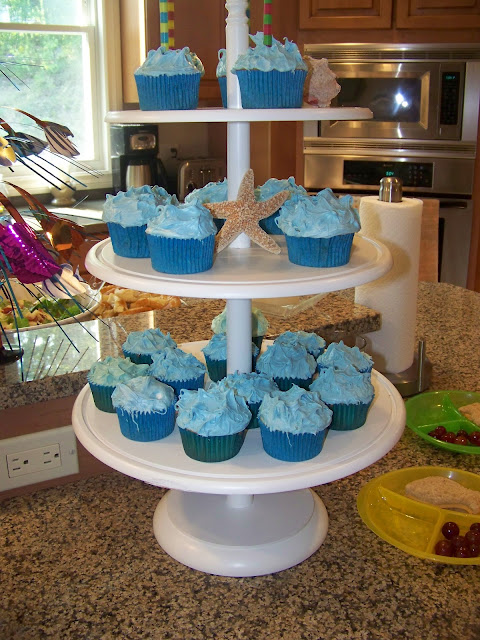 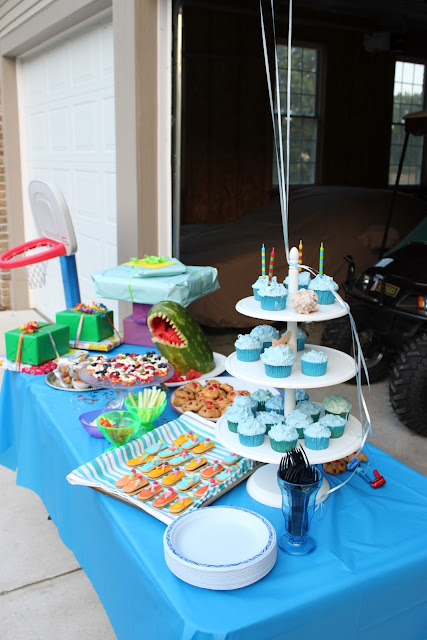 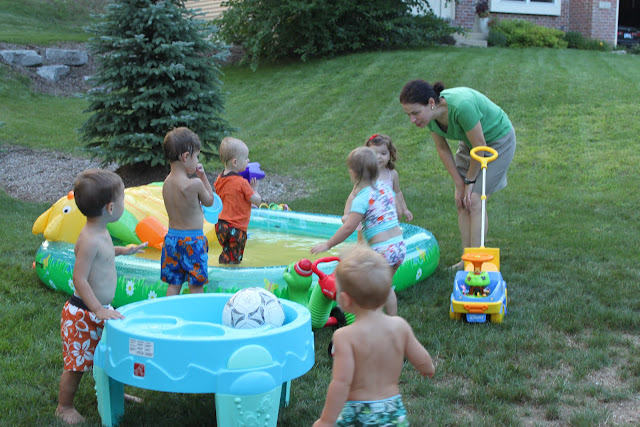 At the end of a great afternoon, the boys sat down to read their Birthday cards and play with their presents before bedtime. At that very moment their cousin was born! So now we get to look forward to next year's shared Birthday celebrations!!! 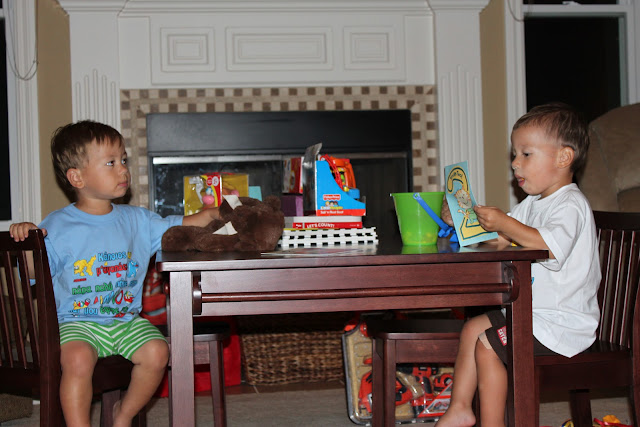