Before the days of my twins' requests for store bought Star Wars costumes I had a couple good years of designing and making them. One year, it was construction vehicles (you can read about those here) and the following year, my most favorite, the robots! Who doesn't love robots?! One of my sons especially loved them and asked me questions daily on what they are made of, who makes them, what they can do, etc. We did a lot of research on robots and when I suggested we make our own, they loved it!

After I "googled" robot images, I created a design that I liked and thought was feasible to make. Many times I get these grandiose ideas in my head, but when it comes time to make them I get stumped on something. These costumes actually turned out very close to what I had envisioned. The only hard part was figuring out how to make them so they were easy to take on and off. I solved that by using the cardboard box flaps and keeping them open in the back so they could almost "walk into" them. After all, these little guys had to put these on and take them off at their preschool. 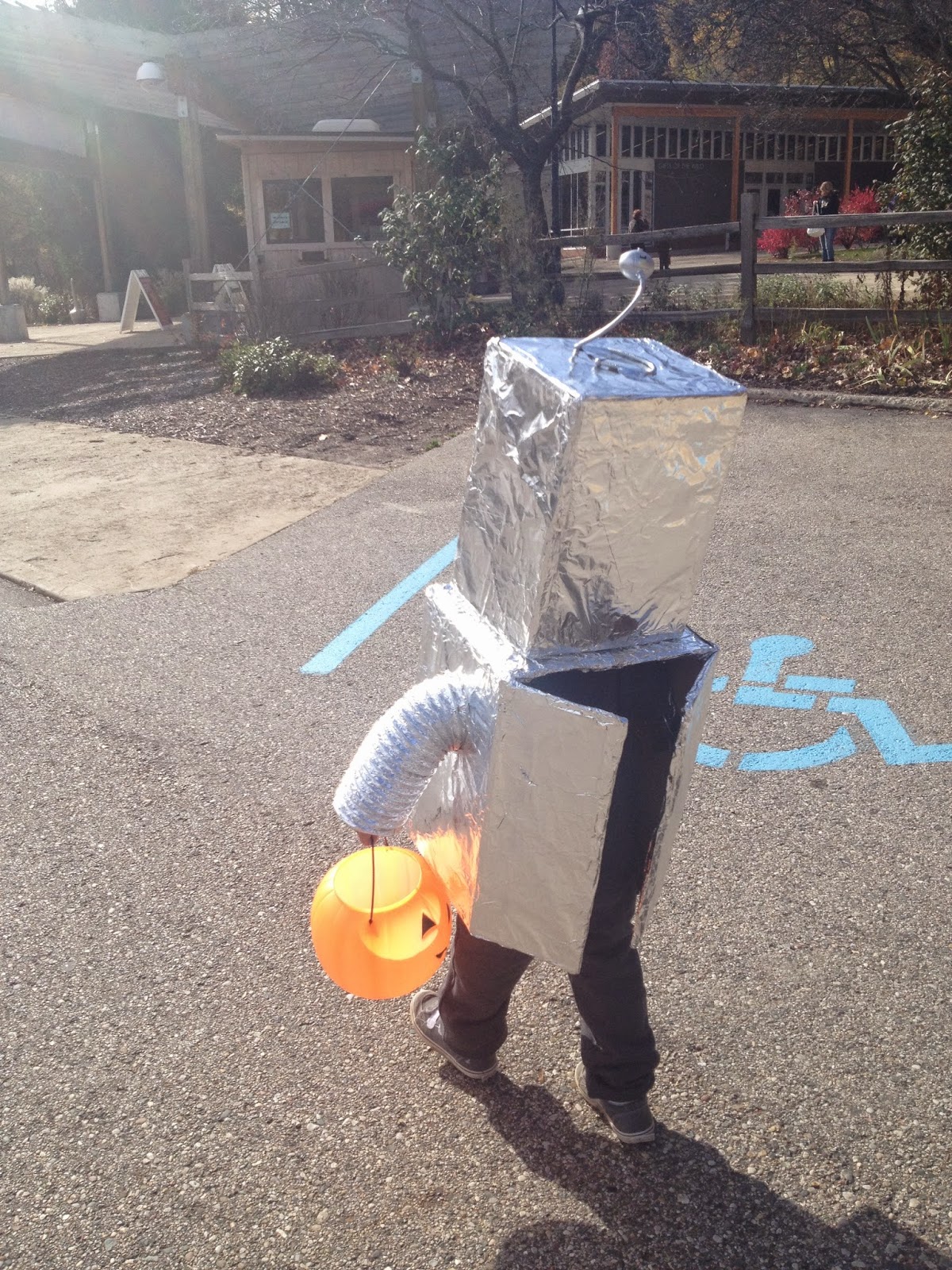 Two boxes taped together and covered in tin foil were the body of the costume. I used diaper boxes around their middle which was a good fit, and I cut the cardboard of the second box to make the head piece. The cardboard was simple to cut with a box cutter knife.

I used dryer vent tubing for the arms, this was the most expensive part of the costume at $20 from Lowe's. However, I loved how it looked and wanted to use it for the legs too, but that was just too complicated for a 4 year old to keep putting on and taking off for all the Halloween events we like to attend. To make the arms, I simply measured their arm length and the tubing as close as possible, cut it, and duct taped it to the inside of the box.

The fun part was roaming the aisles of Dollar Tree looking for "robot looking" items to attach. I found circle foam stickers, a travel game with pegs, and computer chip looking things (I wish I knew what these were called). I searched the internet for a gauge graphic, printed and glued it to an old CD. I also picked up a tire gauge at our local grocery store and my favorite find, the battery operated, bendable reading lamp that went on top!! It was cheap and looked so cute lite up at night.  I attached all of these items with either glue or grey duct tape. 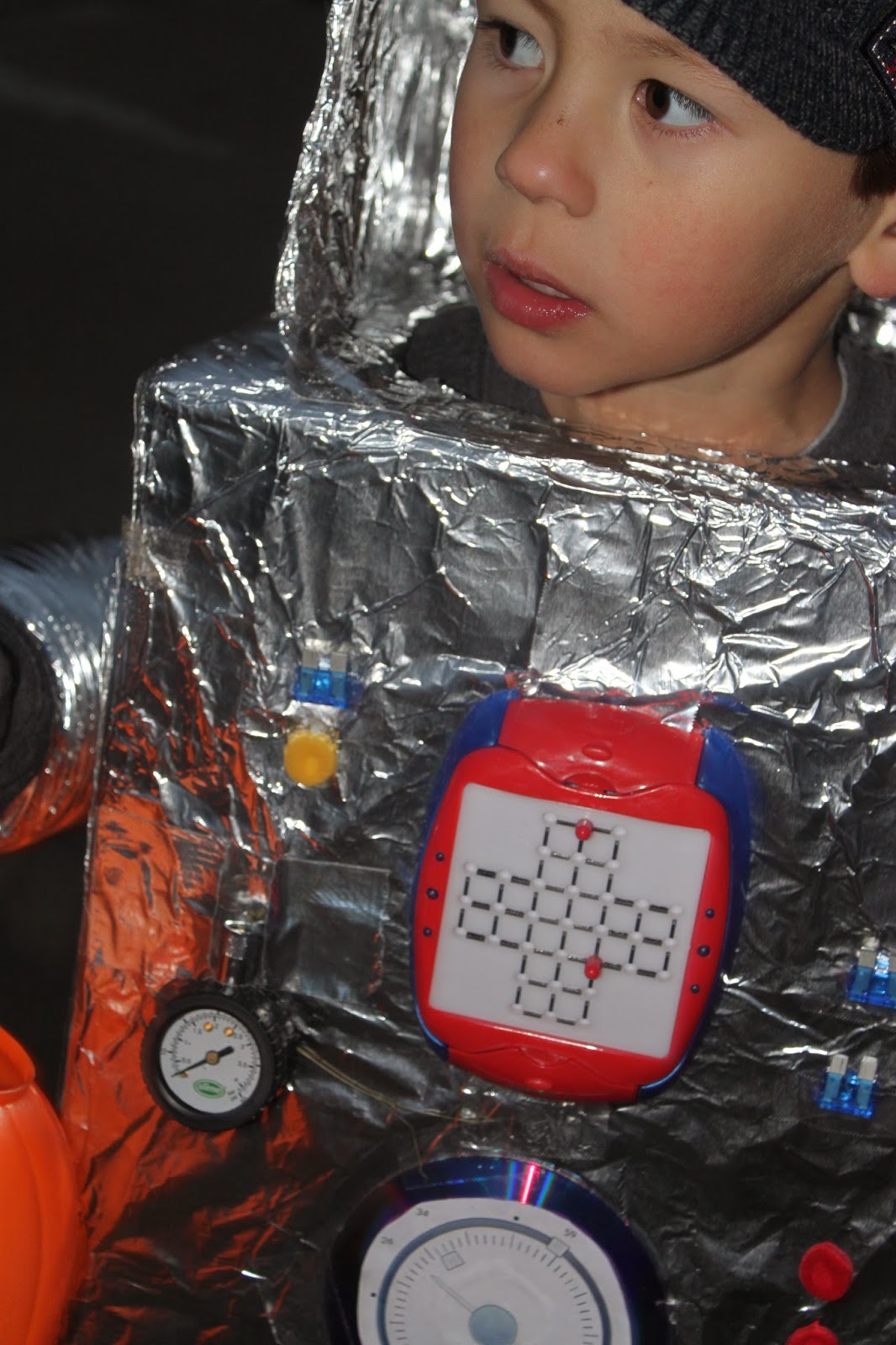 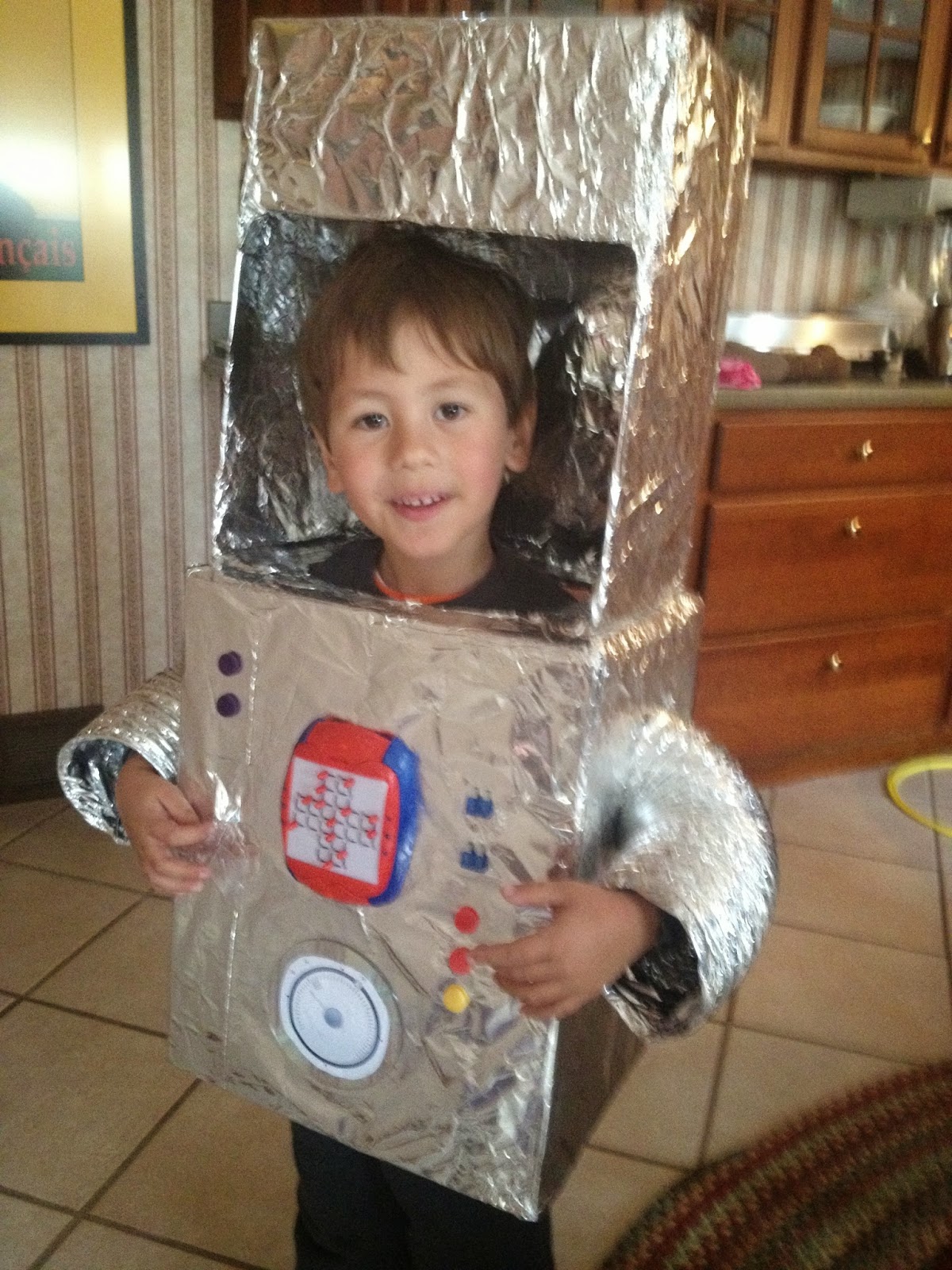 Lastly, we found grey sweatshirts and sweat pants to wear underneath. They were so cute and such troopers hauling those bulky, box costumes around with no complaints. After awhile, I asked them if they wanted to take them off and they both resounded with an overwhelming yes! Watching them run from house to house free as a bird without a big box on and realizing just how heavy they could get after carrying them around for awhile I told them next year they could pick their own costumes, and they don't have to be made out of a box!

However, my creativity and control of Halloween costumes doesn't have to end there!! I still have a few good years with two more ahead!!! This was the girls' first Halloween and my biggest success that year was making sure all four had their Halloween costumes!! Since these two weren't much older than a month they got a little break :)