My twin's first Birthday party was the first time I hosted a party post-babies and the first time I was responsible for feeding 30 plus people an actual meal. It was a lot different from the parties in my early twenties where a keg and few crock pots full of cocktail wieners and meatballs were sufficient! Needless to say I learned a lot that day about hosting large dinner parties. And the two most important things I learned that day were:

1. You can never have too much food because it goes fast!
2. Thank goodness for family! My mother-in-law saved me that day by quickly whipping up four more homemade Greek dishes when she realized the food I had was not going to be enough for everyone we had coming to the party. This woman is amazing and a fabulous cook!


The menu and decor were Mediterranean themed and simple; blue and white plates, cups, napkins, and lots of white votive candles. Blue and white Birthday hats and banners were also hung up and scattered around the house. Because what one year old is really going to care if they have a children's themed party or not?! Although, once the boys turned two, the children's party themes have been in full effect!

However, this first Birthday party was to celebrate the boys turning one in the company of family and friends,old and new. My mother-in-law from New York was there and primarily in charge of making the food (see above paragraph). My best friends for years and our new friends from church and the neighborhood were all there to celebrate. 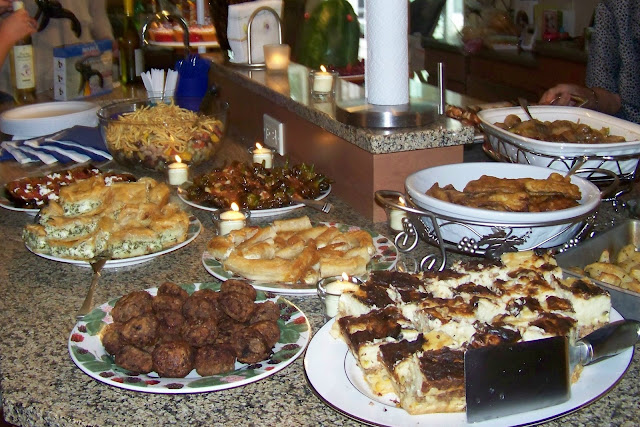 For dessert, my mother made the shark watermelon complete with Swedish fish inside the mouth! My mother-in-law also added a few dozen homemade goodies such as delicious baklava and I made the "cupcake cake". I got the idea for the "cupcake cake" from the book Hello, Cupcake! Written by Karen Tack & Alan Richardson. In the book they have the cupcakes stacked on top of each other to look like actual cake, however, I thought that would be too messy with all the little ones so I used a three tier dessert stand. The candles were carefully constructed by my brother-in-law and good friend Elise. They did this twenty minutes before the party was set to begin since I was clearly not ready and on the verge of a nervous breakdown! The candles were made out of Chocolate Pirouette Rolled Waffers from Pepperidge Farm with banana Runts as the flame and orange icing to hold them together. 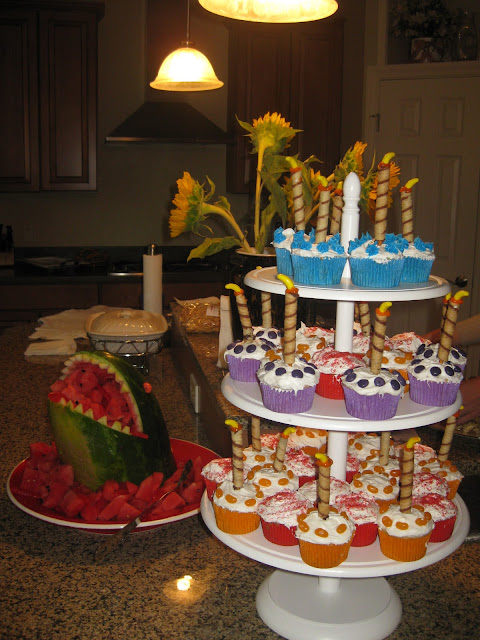 The Birthday boys each had their own yellow cake with chocolate frosting and fell in love with sugar that day. Since one of my guys wasn't feeling well we did a re-do on his Birthday cake the next day when he was feeling better and he may have had the biggest smile I have ever seen on his face. Until the day he discovered construction vehicles and planes that is!

After dessert the boys opened their gifts and played with their friends until it was time for everyone to leave. It was a great day and thankfully turned out to be a successful party!


And the great thing about having half of your family living in another state is that you get to have TWO parties! That's right these loved little guys also had another Birthday celebration in New York at Calabria's with our Greek family and friends. I didn't need to plan this party, my in-laws took care of that. The room was full of family, friends, laughter, good food, wine, balloons, and two very happy little twin boys!