The boys were two months old on their first Halloween so we stuck a pumpkin hat and cute little Halloween onsie on them (courtesy of my sister) and called it good. But the second year, it was time to party! I was so excited to get the boys their first Halloween costumes that I ordered these in August of that year! This turned out to be a great idea since we had to do many trial runs before they got used to wearing them. No joke, this may have been the first time my lion didn't cry in this cute little getup.

Before this child-friendly Halloween party, we hosted an annual "adults only" Halloween party for five years. Here a few glimpses of our past parties... 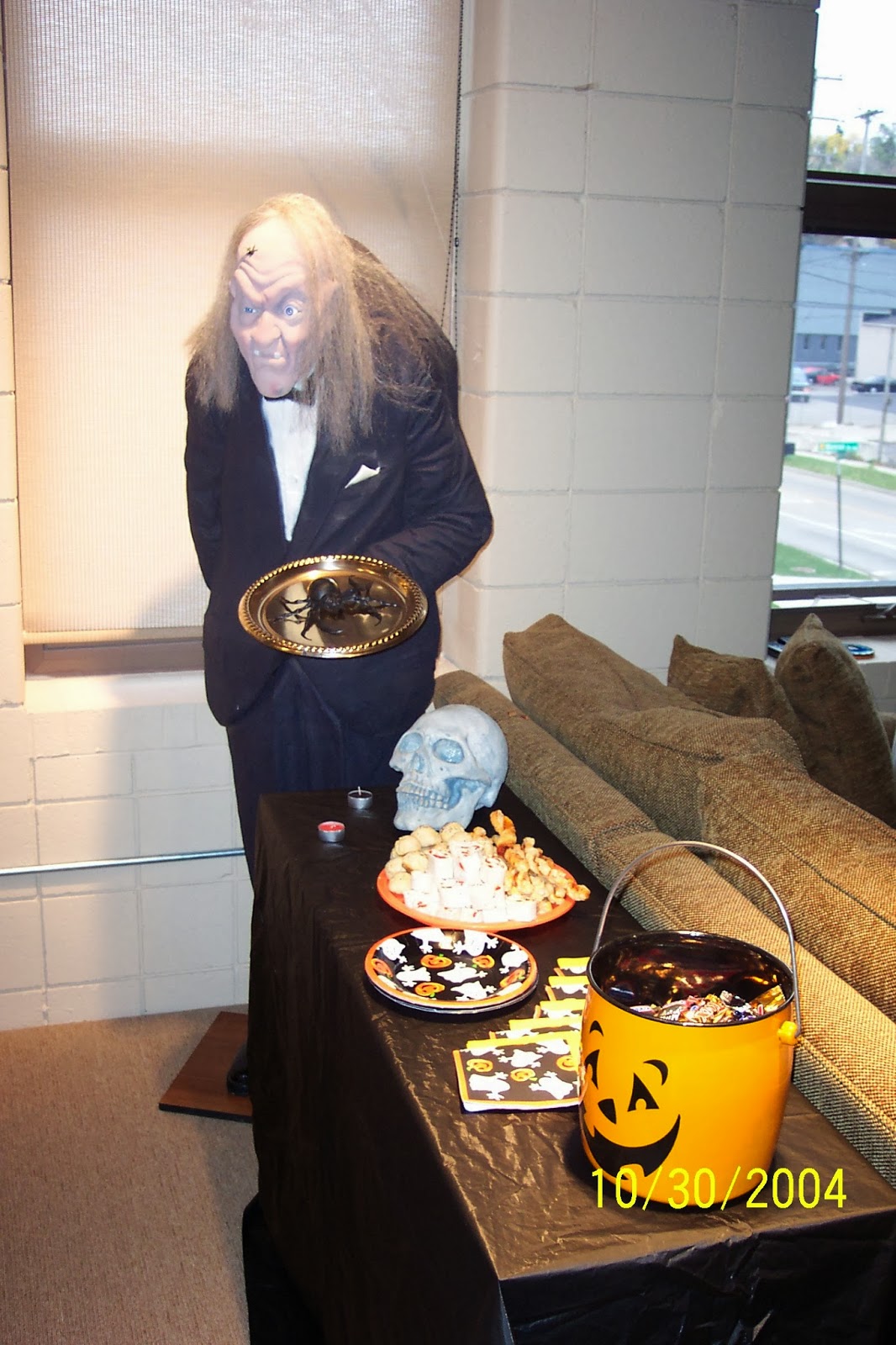 So, as you can see, there were quite a few changes that needed to be made to accommodate the majority of our new guests in the age 2 and under category! While it was easy to cut way back on the alcohol, make more fun and creative food, and add a game of pin the nose on the pumpkin, I did find it hard to scale back the decorating. The skeletons, fake blood, hanging bats, 6 foot tall Dracula with glowing red eyes, and creepy music stayed stored in the basement. However, I couldn't bear to keep one of my favorite decorations, the witch, in storage too. Thankfully, she didn't scare any of the kids away. It may have helped that inside her pumpkin were popcorn stuffed plastic monster hands from Oriental Trading for each family to take home after the party. And honestly, I think the very young age of our guests was a factor. I chose not to bring her back out the following year for our second Halloween party because we had many more little munchins in the age range of 2-5 years attending. Although this witch may have retired for the next year this doesn't mean a new witch didn't make an appearance. Stay tuned....


While the decorations were kept to a minimum, the menu expanded greatly!
The appetizers consisted of cheese & crackers, swamp toes (pretzel rods dipped in chocolate with a sliced almond died green for the toenails), and witches fingers (spicy, cheese bread with pepperoni fingernails). I posted the recipe for witches finger below. The swamp toes and witches fingers recipes came out of Ghoulish Goodies by Sharon Bowers. This book has a ton of cute Halloween recipes.

A fall salad with cranberries, pecans, feta cheese, red onion, and a light vinaigrette was on the table. As was ants on a log and fresh fruit (for the kids or kids at heart), Martha Stewarts's homemade macaroni and cheese (a family favorite), individual servings of beef stew with ghostly mashed potatoes, and a variety of Greek dishes (my mother-in-law was back!) served as the main course.
Witches' Fingers Recipe from Ghoulish Goodies

1. Preheat the oven to 400 degrees. Line 2 baking sheets with parchment or wax paper.
2. Place the water and butter in a saucepan and bring to a boil over medium heat. Take the pan off the heat and stir in the flour, salt, cumin, and chili powder. Return the mixture to the heat and cook, beating constantly with a wooden spoon until the dough starts to pull away from sides of pan, 1 to 2 minutes.
3. Remove from heat and stir 1 to 2 minutes, until slightly cooled. One at a time, beat in the eggs, incorporating each egg well. Stir in the mustard and cheese.
4. Put the dough in a Ziplock bag and cut a 1/2 inch hole in one corner. Squeeze 3 inch long fingers onto the prepared baking sheets. Brush them with the egg yolk mixture and press a pepperoni fingernail onto each tip. Lay a few rosemary needles just beneath the nail in the middle of the finger as knuckle lines.
5. Bake for 15 to 18 minutes, until the fingers are golden brown and crisp. Serve hot or warm. If you store them (in a sealed bag in the refrigerator for up to 3 days), reheat for 6 to 8 minutes in a 350 degree oven before serving.

And for dessert, chocolate pudding dirt cups topped with crumbled Oreo cookies and a gummy worm!


The drink station consisted of two different local micro-brews in the cauldron, blood red wine, and a non-alcoholic red punch made of 2 quarts cranberry juice, 2 quarts apple juice and 2 liters of ginger ale. I also filled a clean latex glove with water and froze it before peeling the glove off to reveal a hand shaped ice cube to put in the punch. Although, by the time I got around to taking a close up picture of the punch only one finger was left on the hand. I opted to leave this picture out. Currently, I have become much better at taking detailed pictures to capture the event and making sure that I have time to take pictures before the guests arrive. Just another helpful tip that Mrs. Party Planner has learned along the way! 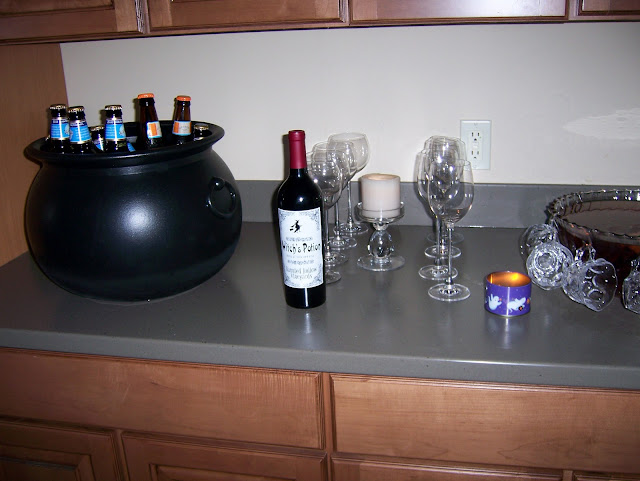 At this party, the meal was the big event since most of the kids were too young to play games. So we ate, chatted, took lots of pictures of the kids and adults in their costumes, and played with the toys that came in each child's party bag. I didn't get a picture of the favor bags, but inside the pumpkin decorated plastic bag were large bouncy balls, a small colored flashlight, monster sucker, and a monster pop-up all bought from Oriental Trading. I also had a couple of party bags with a teether or rattle for a couple of the babies that attended too.


In the end, I must say it was a successful night and just the beginning of many family friendly parties to come!