When my boys were two they loved cars, trucks, trains and airplanes, but those didn't measure up to the love they had for construction vehicles! When on the road little voices from the backseat would yell out, "Bobcat!" "backhoe loader!" "excavator!" They knew the names of every piece of construction equipment and schooled family members on what each machine did. So when it came time to plan their 3rd Birthday it was pretty easy to come up with the theme.

I decided to use a black plastic table cloth to resemble the road and from there I incorporated the boys construction vehicles for decorations and the washed up a toy dump truck as a candy dish for the appropriately construction colored Reeses Pieces. Online at Birthday Express I did find Caution tape and orange colored cones seen on the table as decorations. I decided to make the Happy Birthday banner myself and couldn't believe how easy it actually was. I went to Michael's Craft Store and picked out the heavy colored paper I wanted, black and white ribbon, and black stick on letters and numbers. From there I cut a large triangle and used that as a base for the rest, stuck on the letters, and stapled each flag to the ribbon. These are easy to make and way cuter than store bought ones. 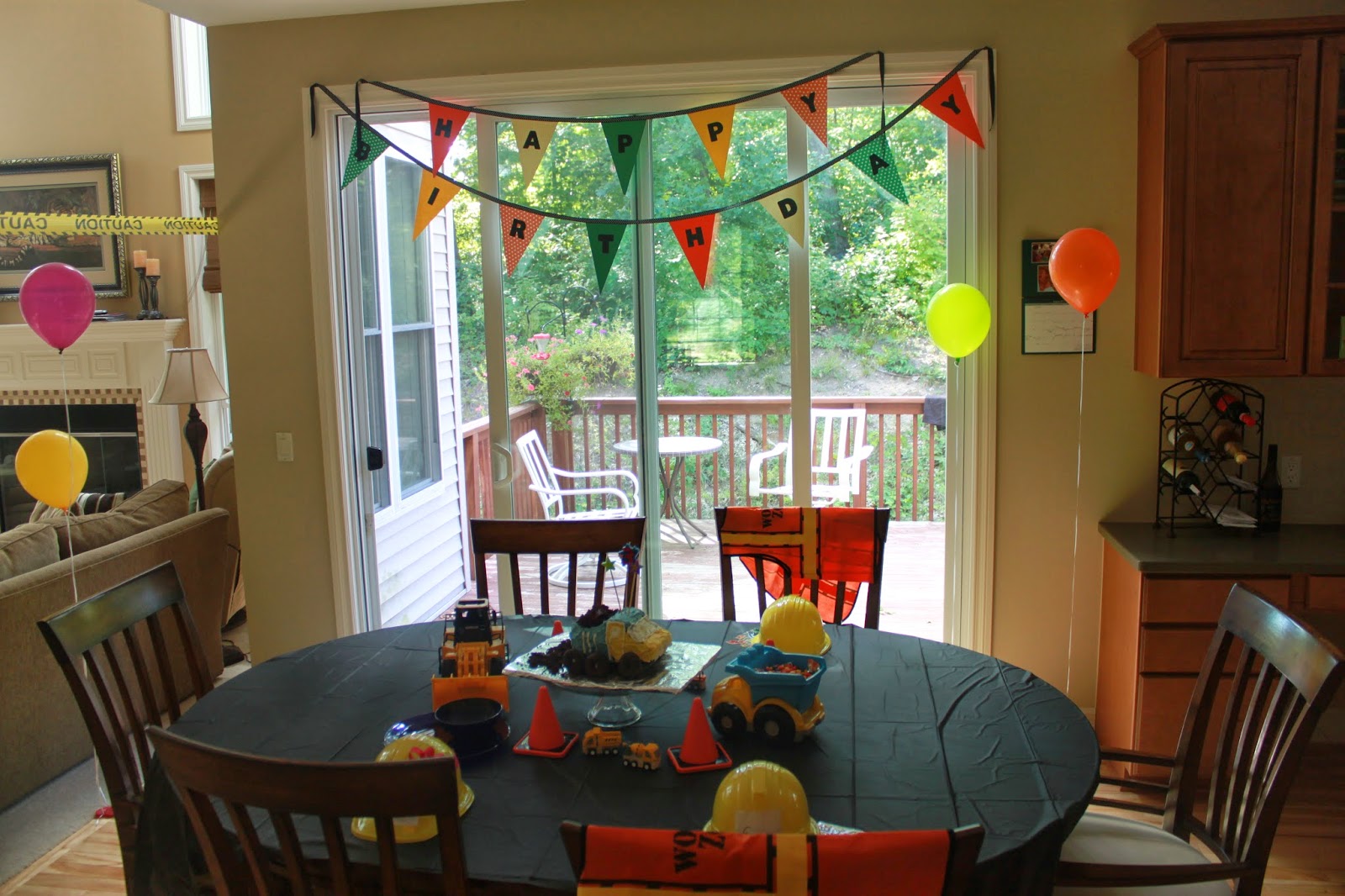 We also needed construction vests and hats, I found these at JoAnn Fabrics. I decided to personalize the hats for the boys and their cousin at the last minute. I wrote their names in marker and taped them on while adding a pink ribbon to their cousin's hat. If I had thought about this ahead of time I would have done a better job personalizing them by either writing the names onto the hats in permanent marker or printing the names out in a fun font on the computer using yellow paper to blend in with the hat. 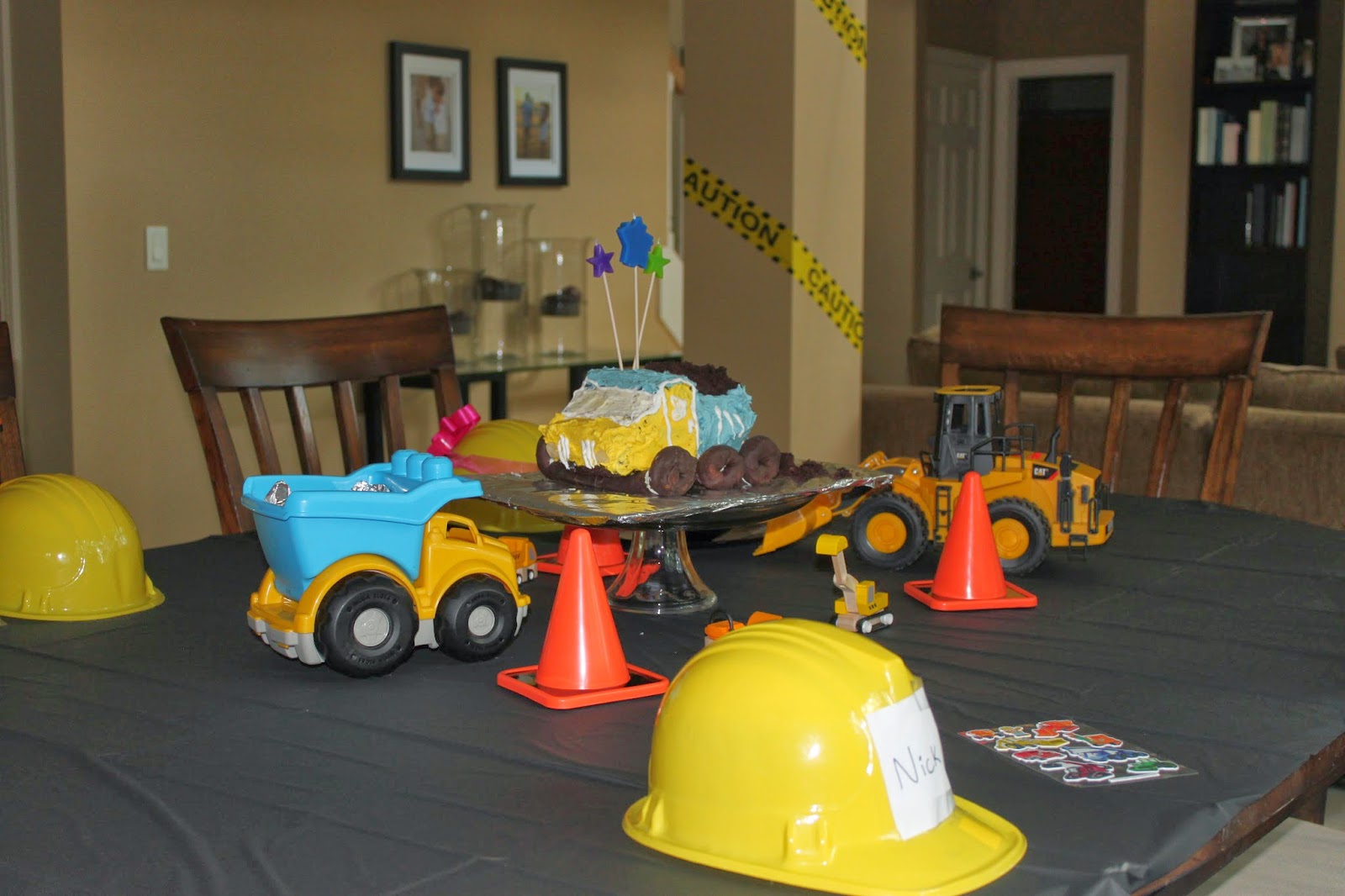 For appetizers we had veggies and dip and fruit kabobs. Homemade macaroni and cheese for the kids. Grilled jalapeno turkey burgers, corn on the cob, salad, baked beans, and potato salad for the adults. And for dessert, the dump truck cake and vanilla ice cream. The boys were amazed. I must admit it wasn't bad for my first effort at something besides a traditional round cake. I found the instructions to make the cake in the magazine Fun Food by Taste of Home. However, I decorated the cake differently using frosting instead of shoestring black licorice. I am writing the instructions according to how I decorated the cake. It's not that we aren't fans of black licorice, it's just that I'm not a fan of spending time on tons of tiny cake details! Again, another reason I don't bake often.

1. Prepare cake mix according to directions. Pour into 2 greased 8in. x 14in. loaf pans
2. Bake at 350' for 25-30 minutes of until a toothpick inserted near center comes out clean. Cool for 10 minutes before removing pans to wire racks to cool completely.
3. Using a serrated knife, level the top of each cake. Crumble removed tops; set cakes and crumbs aside.
4. In a small bowl, cream shortening, butter and confectioners sugar until light and fluffy. Beat in milk and vanilla until smooth.
5. Place 1 cup frosting in a small bowl. Place 3/4 cup frosting in another bowl; tint blue. Place 1/4 cup frosting in a third bowl; leave plain. Frost top of one cake yellow; top with remaining cake to form truck body.
6. For truck cab, measure 2 in. from one end. Cut 1-3/4in. straight down; cut at an angle 1-1/2in. deep and 1 in. toward the front of the truck. Remove cake wedge and save for another use. For dump truck bed, leave 1-1/2 in. of cake for cab roof, then cut 1/2in. deep at an angle. Make a horizontal cut to the back of the truck. Remove cake wedge and save.
7.  For wheel axles, place 2 snack cakes side by side and 1/2in. apart near one corner of an 11in. x 10in. covered board. Place the remaining snack cake parallel to and 2in. from the inside snack cake. Carefully arrange truck body over snack cakes. Frost the hood, doors and bottom third of the truck with yellow frosting. For wheels, attach doughnuts with plain frosting on each side of truck.
8. Spread some of white frosting on the slanted window shield. Place the remaining white frosting in a pastry or plastic bag. Cut a small hole in corner. Pipe the windows on the doors, front grille, and side of dump truck bed. Frost the rest of the dump truck blue.
9. For headlights, cut gumdrops in half. Place rounded half of each on outside of grill; discard the remaining cut gumdrops.
10. Place M&M's on back of bed for rear lights. For back bumper, break candy bar into individual sections at perforations. Cut one piece in half widthwise. Place some of the chocolate, flat side out, on the truck back. Spoon reserved crumbled cake into the truck bed for dirt. 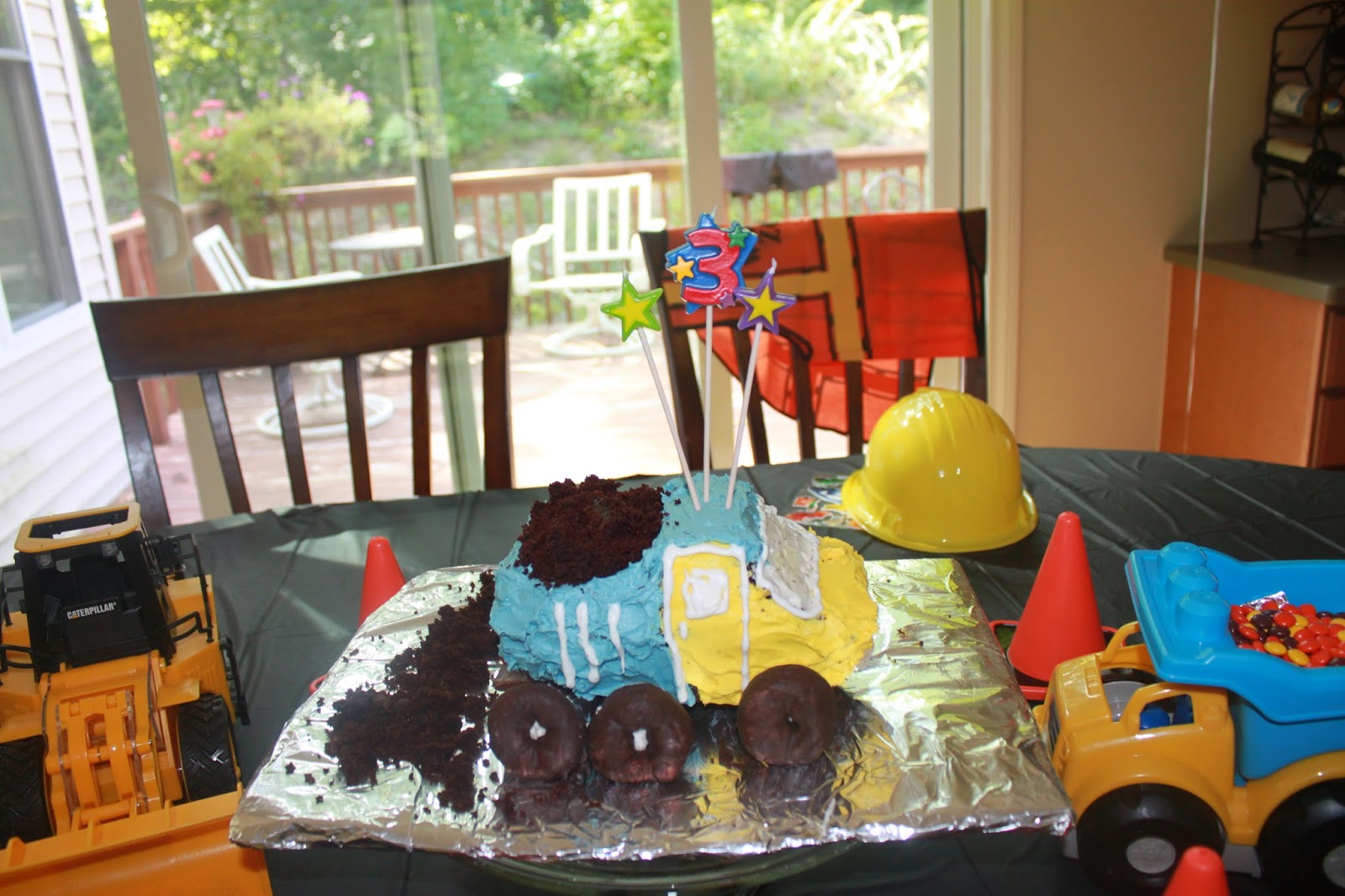 And what would a construction themed Birthday party be without an actual piece of construction equipment?! I put the word out among friends and acquaintances that I was looking to rent a loader or bobcat for about an hour and yes, it was for the sole purpose of bringing the biggest smiles to my little Birthday boys faces. I got a couple leads but unfortunately nothing worked out. I then called a couple rental companies and quickly realized there was no way I would pay what they were asking to rent a piece of equipment for the weekend. I was crushed, I really wanted to surprise them with this. Then one night on my way home from the grocery store I spotted a bobcat in the backyard of a house right around the corner from my house! So doing what any half crazy, party planning, proud momma of construction vehicle loving boys does, I walked right up to the house and rang the doorbell. Thankfully a sweet, soft spoken man came to the door and after hearing my speech about wanting to rent a bobcat for my 3 year old boys to sit in and ride for an hour, he didn't look at me like I had eight heads but instead said he was a father and understood! I got his card and later called him with the details. I love when things work out like this!!


After the boys got over their initial shock of all this, we explored the bobcat, went on a couple rides, and the boys even got to push the button that raises and lowers the dump truck bed (that might have been as exciting as riding in the bobcat for them!). It was time to thank Mr. Bob again and say goodbye so we could go inside for cake and and presents. 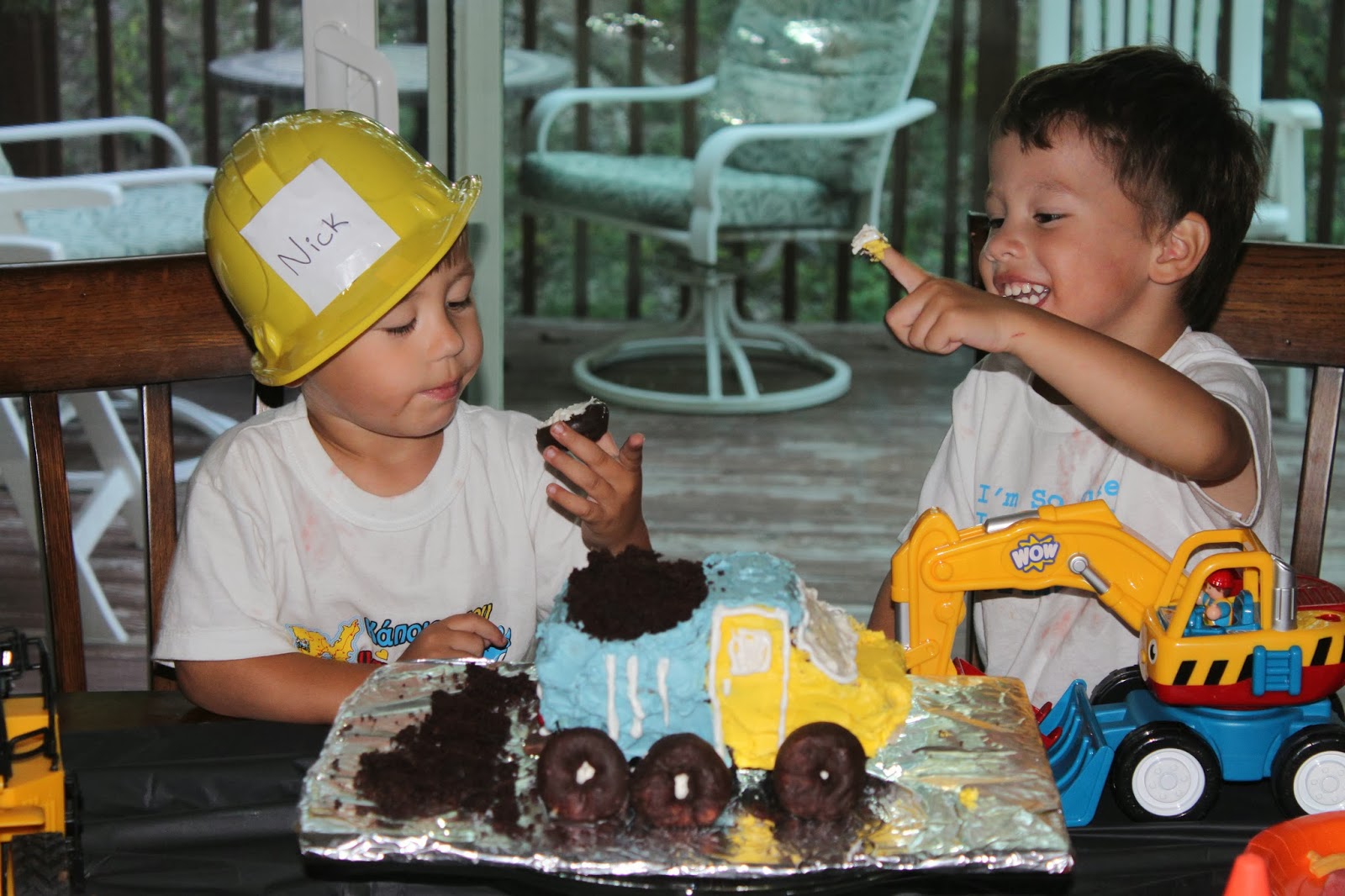 It was a great day and fun party, but it didn't end there. This was the year we started our family tradition of setting off Chinese wish lanterns in honor of the Birthday kids. Each family (my parents, us, and my sisters and their families) wrote a wish on their lantern, lit them and sent them flying. They were fun to watch and we did make sure we weren't going through a dry spell before doing this. 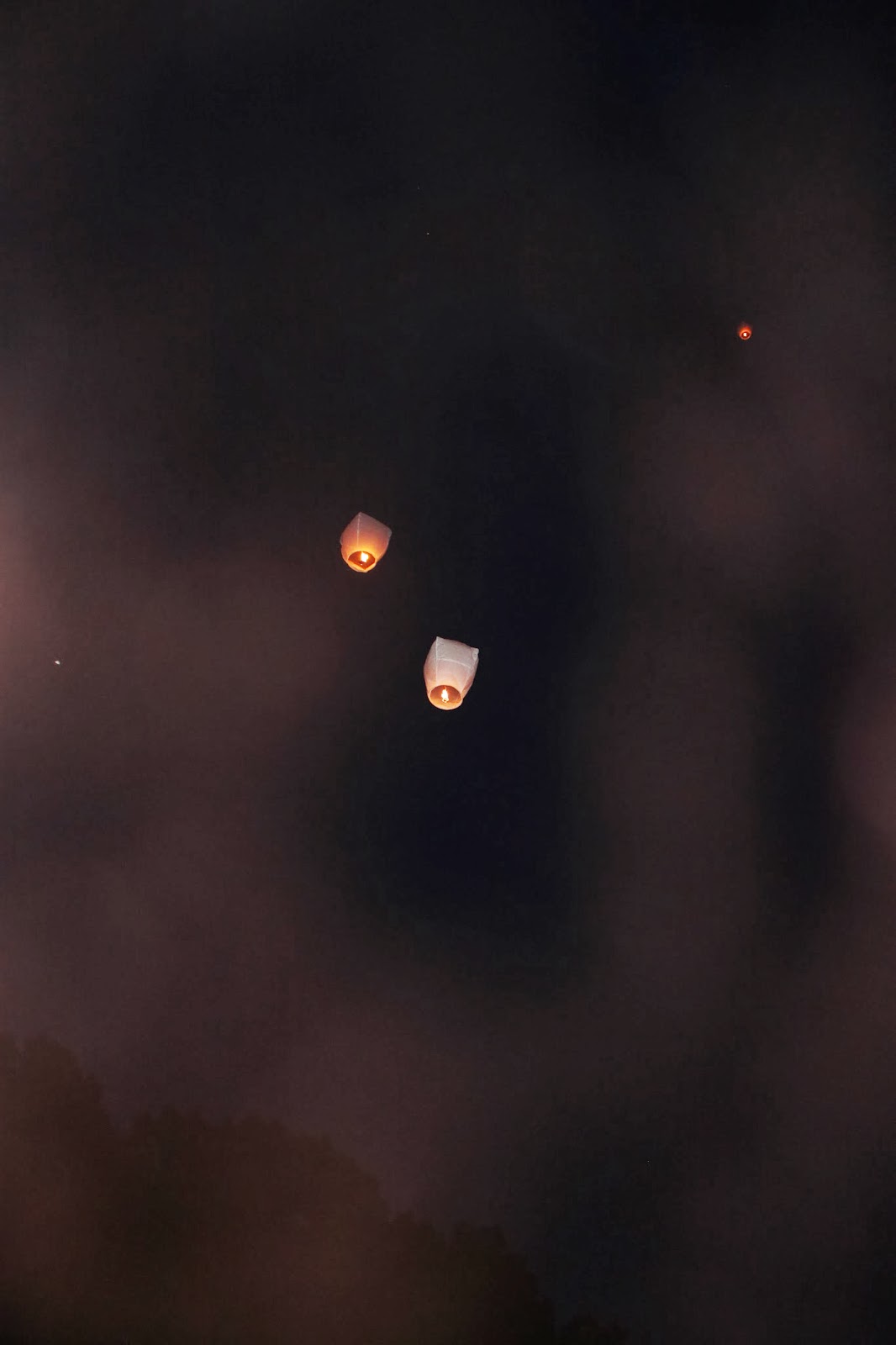 Another tradition we began that year was filling the Birthday kids' room with balloons the night before their Birthday while they are sleeping. That year we also had a trail of balloons from their room to the playroom where grandma and grandpa were waiting to surprise them with their gift. It was a day that we will never forget, and even though the boys just turned three, they still remember their 3rd Birthday well.

While some may think I went overboard on this party,  I would agree with you if it wasn't for the fact that we happened to stumble upon a very nice man who gave us an extremely reasonable price to "play" in his Bobcat. The decorations cost less than $25 and the time I spent blowing up balloons and making a dump truck cake? Well that was worth every minute when I saw the smiles shining on their little faces and an afternoon and evening spent with them and our family making memories that will last a life time.