Welcome to the Carnival!


Late February I was sitting in our playroom watching my twin boys play cars together and flipping through the latest Oriental Trading catalog. The days of being cooped up inside due to the cold winter were getting to me and I needed a project, or better yet, a party to plan! As I skimmed the two page section on carnival themed goodies, visions of sunny weather, red and white stripes, and our huge front yard filled with our friends playing homemade carnival games danced in my head! In my new found excitement I grabbed the phone and called my mom (aka my party advisor and helper) to tell her my idea and see what she thought since I knew this kind of event would need her expertise. She loved it and the ideas were bouncing back and forth right there on the spot. We finally ended the conversation with a date for sometime in July and a mental list of games and ideas.

Little did I know that my mom would take the ball and run with it to make this the BEST carnival that me and my 30 or so friends and neighbors got to attend! She got right to work and constructed six homemade, unbelievable carnival booths in her basement that spring. My mom was definitely the backbone of this event but Mrs. Party Planner did have a hand in the planning and hosting of the event. To read and see more of our carnival please check out her blog whathappensatgrandmas

Since this was a carnival, we needed prizes so we planned the guest list very early. It consisted of the friends and neighbors that our kids liked to played with, 17 total. We could have created some amazing invitations for this event. However, I chose to put the energy into the event itself so I invited everyone personally a couple months before the date. I followed up with emails until right before the event.

After many months of planning, drawing, constructing, and transporting, the day was finally here, it was time for the Carnival!!! The festivities began at 5pm and we welcomed everyone with a personalized bag to hold all their prizes, a welcome program that described the games, and a roll of tickets. Family and friends, including my mom and I were assigned a booth to run. Since we would all be "working," my boys and baby niece got to play all the games first and collect their prizes with mom, dad, aunts, uncles, and grandma and grandpa cheering them on and snapping pictures like paparazzi! My boys LOVED it! Then when their friends arrived they had a blast bouncing around socializing and playing the games again.


These are some of the booths that my mom made....

There was also a Duck Pond, Goldfish Splash, Tattoo Booth, You're So Pretty- for girls only!, Go Fishing, and Guess How Many Jar! We had a bounce house set up for the kids too.

At each booth, you turned in a yellow ticket, played the game, and then were given a blue ticket which you needed to redeem at the prize booth. We had designated prizes for each game and some extra prizes the kids could pick out too. We didn't want any unhappy customers at our carnival! For instance, the boys who played Alien Invasion won a light up space gun (yes, I did check with all the moms first if they were okay with the space guns since the oldest at the time was about 5 years old). When you played ring the ducks at the Duck Pond you won a little rubber ducky and if you threw the goldfish into the fishbowl at Goldfish Splash you won a bubble wand. All very cute prizes, but also prizes that didn't break the budget either. The Dollar Store and Oriental Trading are great places for carnival prizes. Some of the games like Go Fishing,  you took your wooden fishing pole with fake worm and had to fish for your prize, an inflatable fish.

After everyone had played all the games and collected their prizes it was time to eat dinner. Carnival fare was on the menu! Hot dogs, hamburgers, chips, fruit and beverages were served by this guy....


For dessert, you had to spin it to win it! Family members and I each made a dozen of a couple desserts that we used for this.


After everyone ate and relaxed for a bit it was time for our last couple games. The cookie walk was first. I drew numbers on the driveway in chalk and had everyone start out on a number. When the music started you walked from number to number until the music stopped. Once the music stopped I drew a number from the basket and whose ever number was called won a giant homemade chocolate chip cookie! We did ten rounds of this.


Next, it was time for the egg and spoon race. My mom found plastic spoons and eggs that release a bean bag yolk when dropped. A child and parent were matched up and they had to carry the egg on the spoon halfway down the driveway to the finish line. Once you made it, you  were showered in confetti and given a circus striped lollipop!

After the last game, the sun was starting to set and either the kids were high on sugar or exhausted so many families said their goodbyes. However, my husband turned up with a bucket full of water balloons and a fight commenced! What a rousing end to a day of family fun.

This carnival was almost six months in the making, and worth all the time, energy, and money in my opinion. The kids (and quite frankly the adults) faces were priceless and this picture below sums it all up! 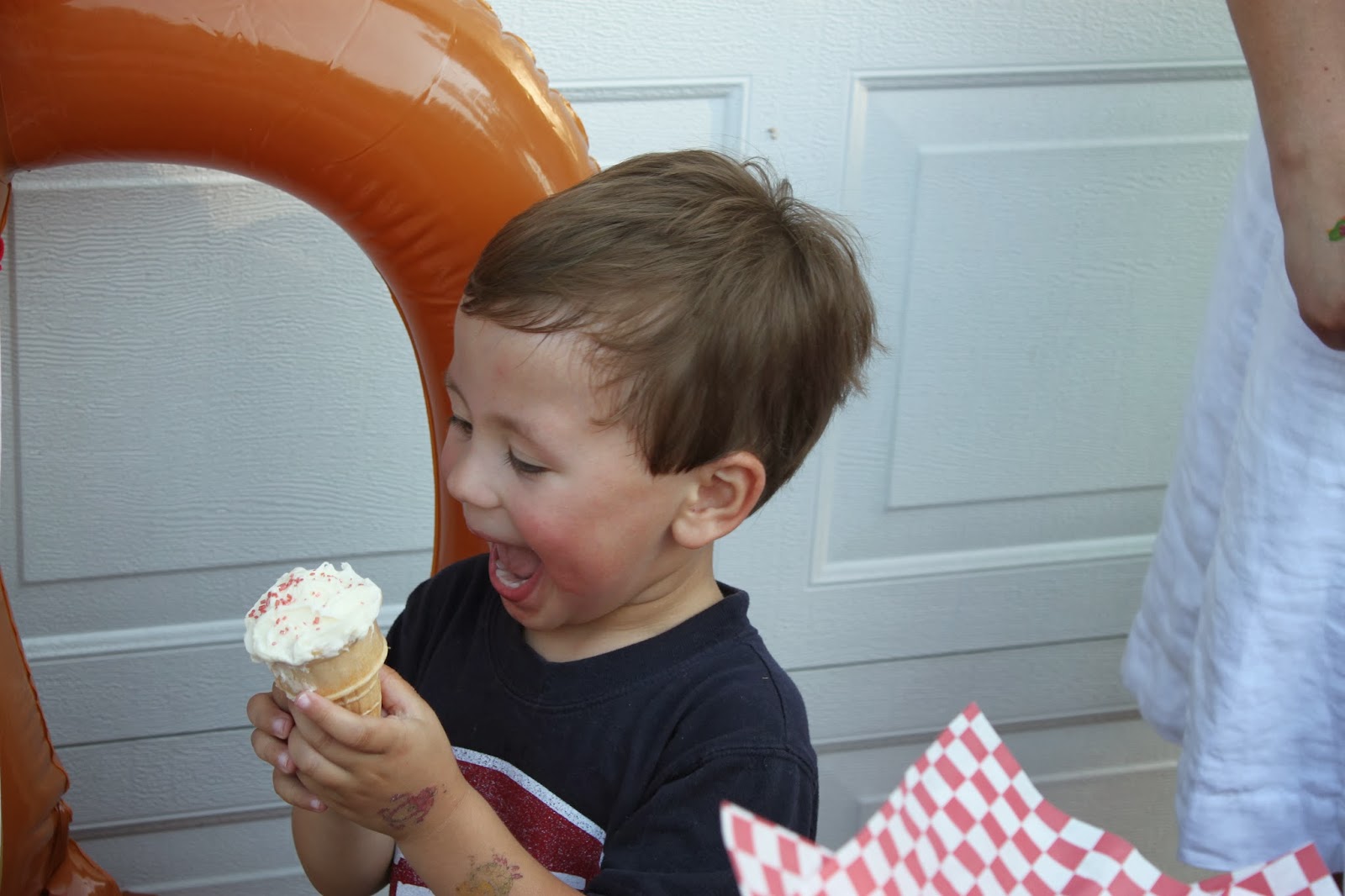 While a lot of work did go into this event, it can be recreated in a range of budgets. You can make your own booths and games if you have enough time to plan or rent some of the games and a dunk tank from your local party rental company. As I previously mentioned, the dollar store and Oriental Trading are great sources for prizes and decorations. Lastly, just make sure to add lots of colorful balloons, banners, lollipops, and cute little party guests!!
Posted by Mrspartyplanner at 12:56:00 PM