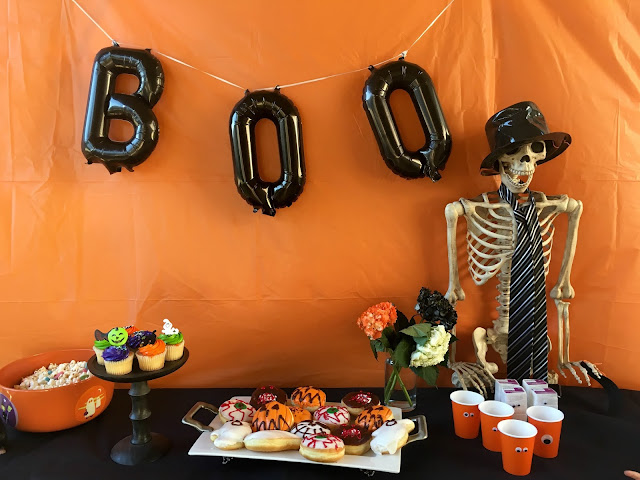 Last year I didn't get to have my usual Halloween fun because our house was on the market and life was extra crazy getting ready for our move. This year, I made up for it! The house was crawling with spiders and bats, gravestones covered the front yard, our skeletons were up to their usual antics and the month was full of pumpkin patches and Halloween parties!

One of the Halloween parties I threw was for the neighborhood kids and their families. While I love our new neighborhood we haven't found many kids similar in age to ours outside running around like we are used to. I assume this is because there is a good mix of young and old children as well as many "busy" families. Therefore, about 48hrs before our planned party of three families, I decided to invite the whole neighborhood! I panicked for a minute but as I suspected I received many thank yous but we have sports practice etc. However, we did have many families stop by who we got to meet for the first time!

Since this was more of an open house party, I put out a vegetable and fruit tray, donuts, cupcakes, and scary popcorn. Sugar overload I know, but c'mon it is a Halloween party! For beverages there was bottled water, mummy juice boxes, and apple cider. 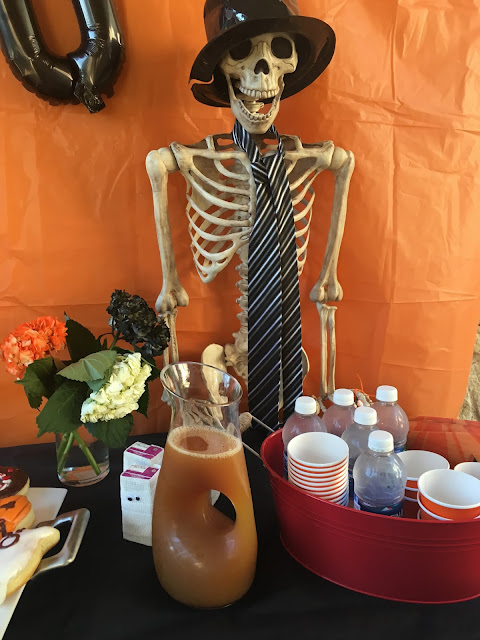 Mr. Bones did an amazing job tending the food and drink table considering the high winds that ONLY kicked up after I set up outside and the 88 degree heat that killed our Halloween hydrangeas in less than thirty minutes. BREATHE MJ.....again the wind?! Well part of party planning is dealing with unexpected issues and figuring out how to overcome them. In my case, lots of Duct tape and a glass of wine solved the problem this time!

After everyone had a chance to meet and talk I had a few games planned for the kids. The first one was a Halloween scavenger hunt on our street. Since the kids varied in age from four to ten I had them all work together, and I have to say for a group of kids that pretty much just met, they worked very well together! 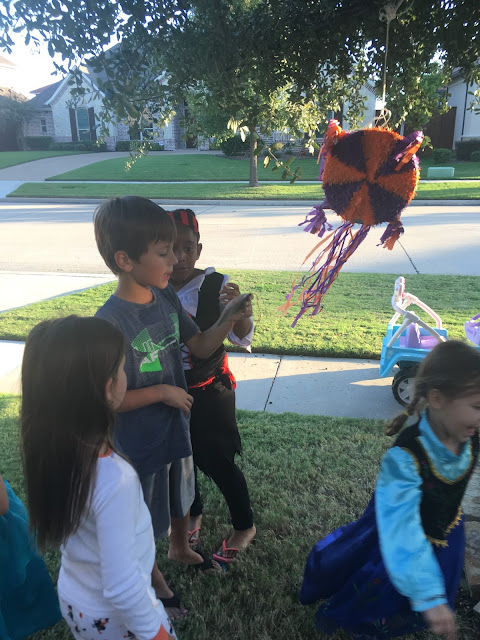 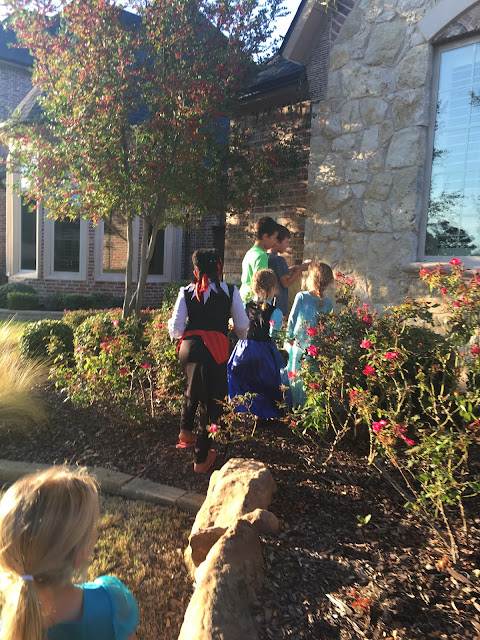 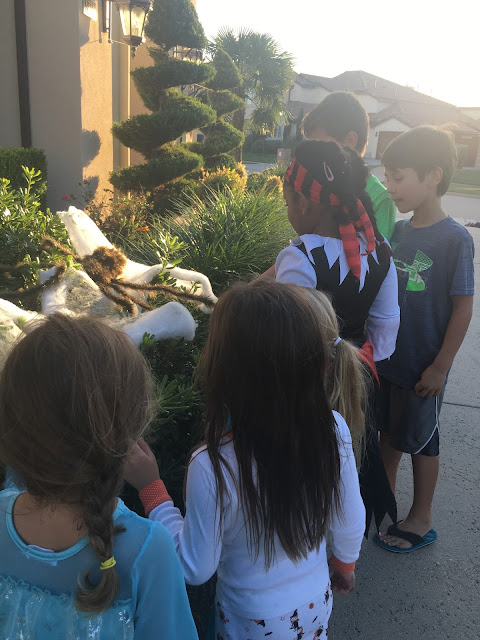 The last part of the scavenger hunt ended with a silly string war that produced lots of laughs! Note to self: never again let my kids play around with my camera. Half of my pictures from this party got deleted! I apologize for the quality of the pictures since most of these were taken with my phone.

Once the scavenger hunt was complete, we headed back to our yard for a pinata filled with small prizes and candy. As many times as I think to myself that pinatas are over-rated the kids have so much fun with them! 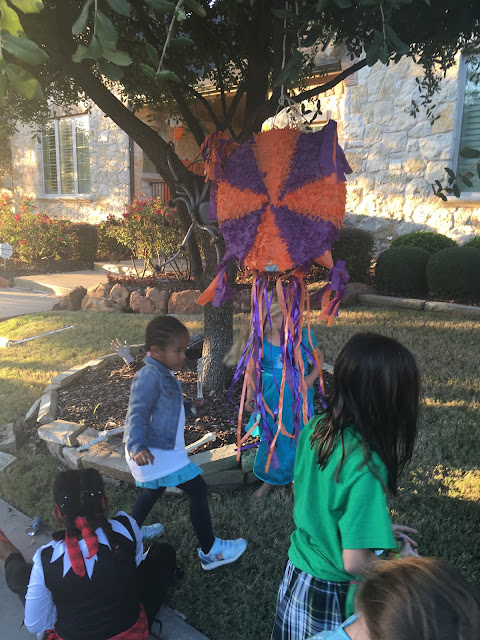 The last game I had planned was the saran wrap ball with candy inside, and yes, I think I gave more sugar out at this party than I allow my children to eat all year. I played Halloween music while the kids sat in a circle, put on winter gloves and unwrapped as much saran wrap as possible to find a treat before the music stopped and it got passed to the next person. If you are hosting any sort of party and need a good group game I suggest this one! A good friend gave me this idea when I was hosting my husbands company Christmas party and it was a hit! We wrapped up gift cards for the adults instead of candy though. 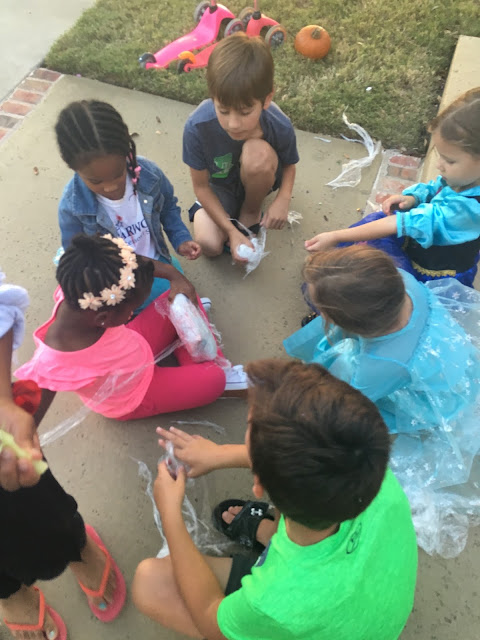 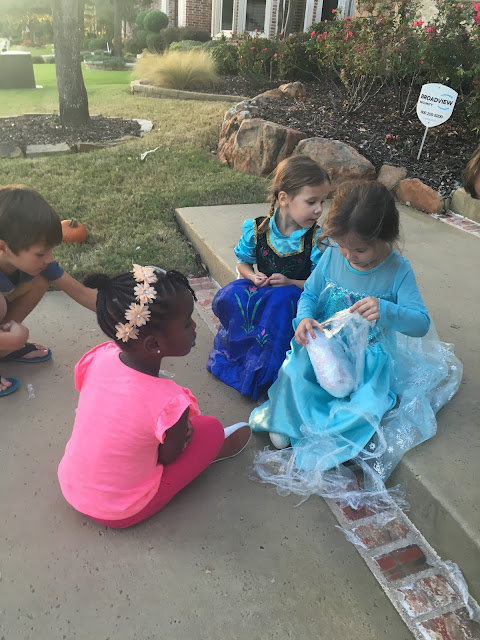 If you have read any of my previous Halloween posts you know that Mr. Bones 1 and 2 (named by my eldest set of twins) are a set of 5ft. skeletons from Grandin Road. They have been appearing on the first of October the last few years and end up in some peculiar poses. They have greeted the boys off the school bus on the golf cart, have sat on the toilet while the other one is taking a shower, or even hid in their beds. In case you are wondering if this is another edition of Elf on the Shelf, relax, it's not! They move or travel throughout the month when momma feels like doing it to bring a smile to their face. And this year, with four kids who I enjoy entertaining, Mr. Bones 1 and 2 were quite busy.

While Mr. Bones 1 and 2 were busy having fun with the kids I attempted some Halloween bento lunches. No, I do not do these on a regular basis because this mom doesn't have that much extra free time but I try my best around the holidays because my kids enjoy discovering these creations.


The other Halloween party I hosted that month was a small, but fun gathering with two great families we have met here. Moving someplace where you don't know a single soul is hard, thankfully these ladies and their sweet families have made it much easier! A Halloween themed dinner, fun adult beverage, a couple games, and great company was in store. 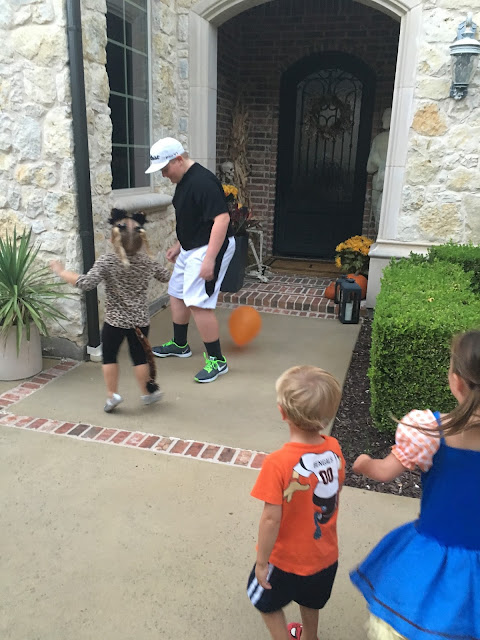 The second game I had planned was Halloween taste testing! The players were blindfolded and then had to guess be brave and try something while figuring out if it was an eyeball or an olive?! A witches fingernail or an almond silver?!


When all was said and done, it was a busy and spooky month of Halloween fun! And you better believe I already have some ideas for next Halloween!!

For more of my party ideas, home decorating, favorite recipes, twin activities x 2, and all things
"Mrs.Party Planner" please check me out on facebook and "like" the page. New blog posts will appear in your news feed.You can also follow me on www.bloglovin.com, on Instagram and Pinterest