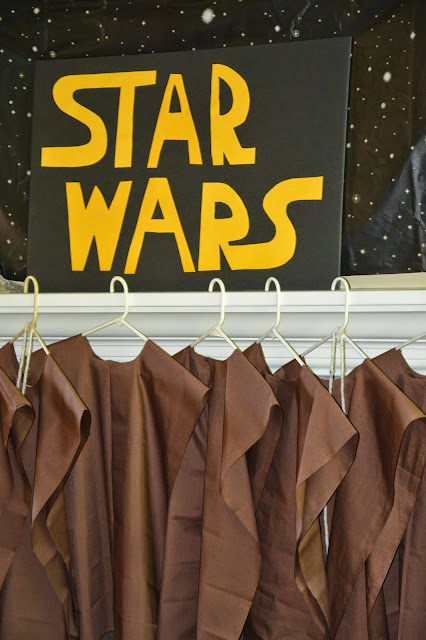 Attention all young Padawans!! The galactic council requests your presence for the twin's 5th birthday. Be prepared to complete Jedi training camp, test your newly acquired skills on Lord Vader himself, experience an invasion of the empire, feast on "Princess Lays®", Palpatine's Pizza, and "Obi Wan Kanbob-ies", then take a seat outside by the fire for an outdoor showing of Star Wars! May the 5th year of life in the galaxy be with you!

Before the latest episode of Star Wars was released at the end of 2015 my little guys were obsessed with all things Star Wars! It all began over Memorial Weekend 2013 when a convention similar to Comic Con took place at the resort we were visiting. Once the twins met Darth Vader and R2D2 they were hooked. Yes, they have dressed as Star Wars characters for the last three Halloweens! So when it was their turn to have a birthday party (every other year) it wasn't hard to think of a theme. By no means am I a Star Wars expert, but I do enjoy the movies and knew enough to create and execute a celebration that resembled the one which took place on the planet Endor after the rebel alliance destroyed the death star and killed the evil emperor.

I am excited to share the details and pictures of our Star Wars Birthday Party, and one of the most fun parties I have ever planned.

From the start I knew I wanted to have "real" Star Wars characters at the party and an outdoor movie showing of  the original Star Wars. The "real" Star Wars characters who we have had the pleasure of taking pictures with at local hockey and baseball games on Star Wars nights are members of the 501st Legion. This is a group of volunteers that promote interest in Star Wars by wearing top quality costumes and attending Star Wars related events while also contributing to the community through charity and volunteer work. Private parties are not this group's priority but this crazy momma made it happen with a flood of emails, phone calls and a donation to the wonderful Make A Wish Foundation this organization supports. I had a back up plan if this didn't work out, but I was on a mission to make it happen! And I have to note, the members that took the time to come to our party were extremely professional, great with the kids, and truly made the party fantastic! Thank you 501st Legion!

Since I was stepping my party planning up a notch this year, I wanted to get real paper invitations. After scouring the Internet for ideas, I was ecstatic to discover these Star Wars party invitation tickets on Ebay from UPA Designs. These were absolutely perfect for this party.  I purchased and customized the file for about $10 and was able to print off as many as I needed at a local CVS.

On the big day, the scene was set with the Star Wars soundtrack playing throughout the house. Once our party guests entered through the front door they were presented with their very own Jedi robe and light saber. The Jedi robes were simple to make. I bought the fabric from Walmart and literally just cut the length I wanted (using my kids to measure how long or short they needed to be) and a hole for their head. The yarn was also from Walmart that tied around their waist.

The light sabers were made from pool noodles I purchased at Dollar Tree, cut in half and then taped with Duck tape and electrical tape for the grip.

The parents helped the young Padawans get their robes on while I explained the tasks they needed to complete in order to achieve the coveted Jedi status. 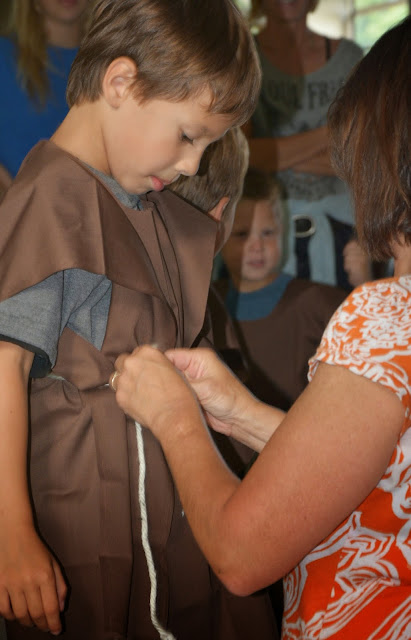 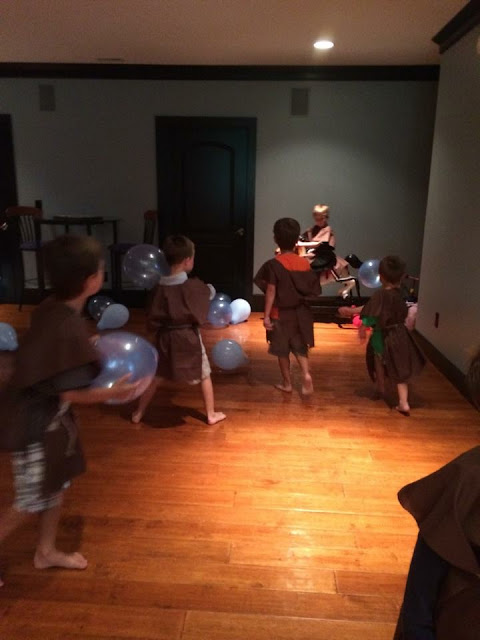 Task number two: Destroy the Death Star. Each Padawan got three chances to shoot and bring down the Death Star with our handy blaster, aka Nerf gun. 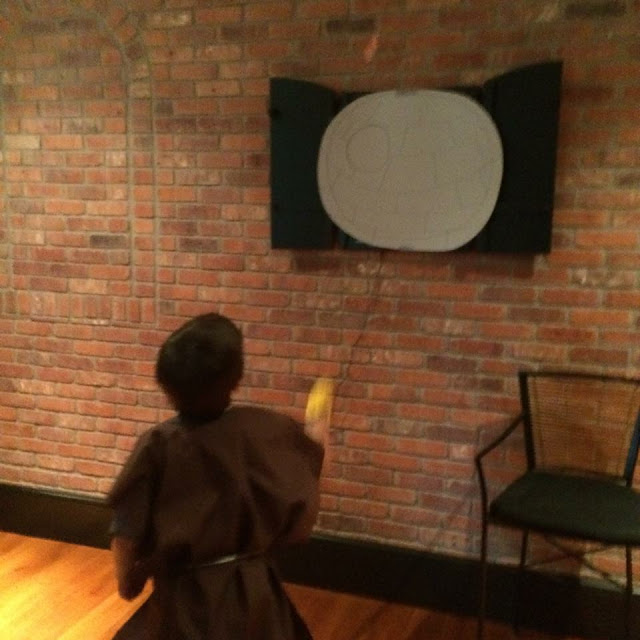 Task number three: Challenge Course. The Padawans had to make their way through the laser beams and retrieve their light saber before hopping over hot lava and scaling an enemy ship (our play loft) then fly down the emergency shoot (the slide). 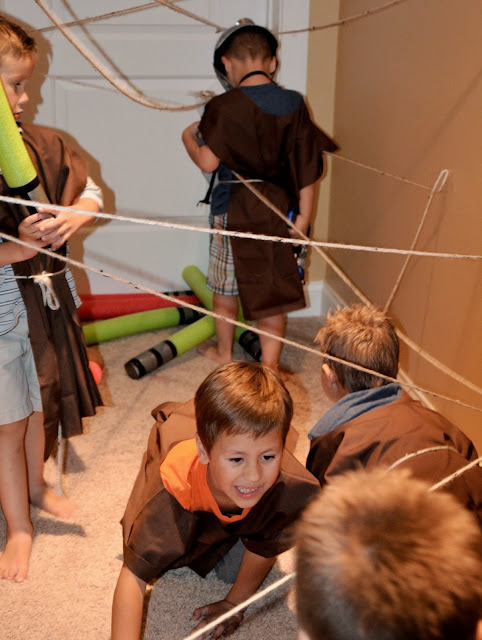 The fourth and final task was to defeat the one and only Darth Vader! When the Imperial March began blasting through the speakers, the young Padawans sensed what was happening, and instead of any fear these brave youngsters took on Darth Vader with a vengeance! Darth Vader was down on the ground in a matter of minutes and victory was theirs. A big thanks to Mr. Chris for playing the part of Darth Vader! 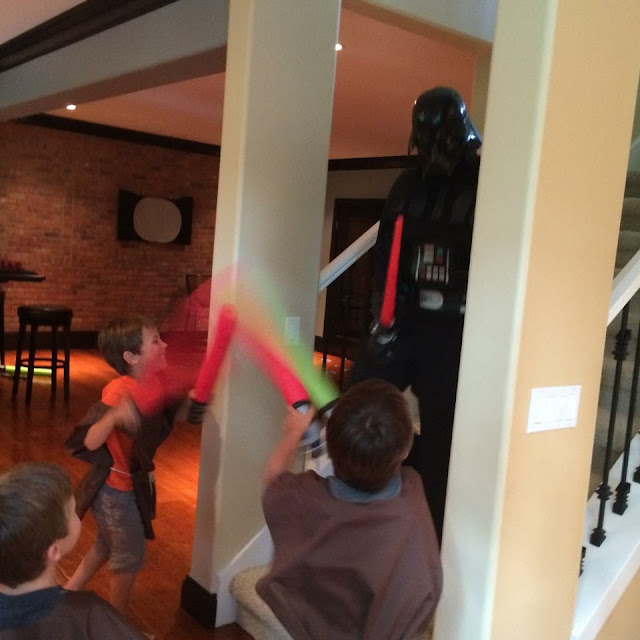 Once these fearless youngsters were done celebrating they were each presented with an official certificate that pronounced them Jedi!

The certificates were part of the Star Wars Instant Download I purchased off of Etsy from Hello My Sweet. This package included the birthday banner, food and drink labels, gift bag tags, and a couple other Star Wars signs.

After I was done presenting the final Jedi with his award an urgent message came through my walkie talkie..an invasion??!!! What?! Cue the emperors arrival song through the speakers and we all ran upstairs to see what was going on...wide eyed little Jedi were greeted at the top of the stairs with this... 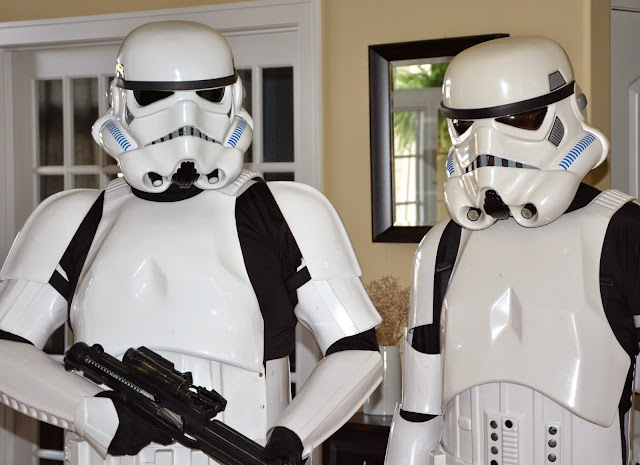 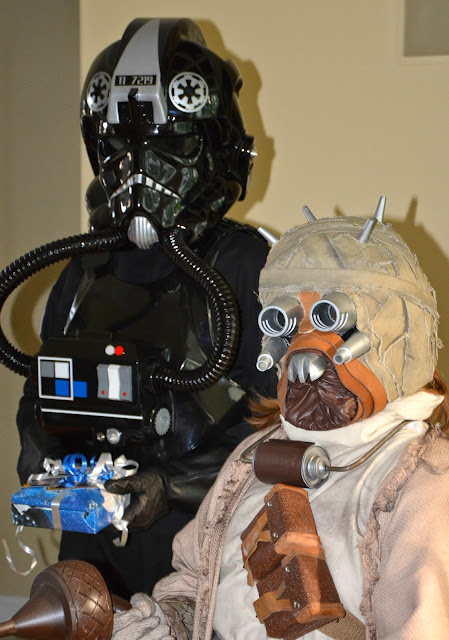 Once the initial shock wore off and the young Jedi realized that these members of the empire were actually friendly and even came bearing gifts for the birthday boys lots of smiles and pictures were taken! 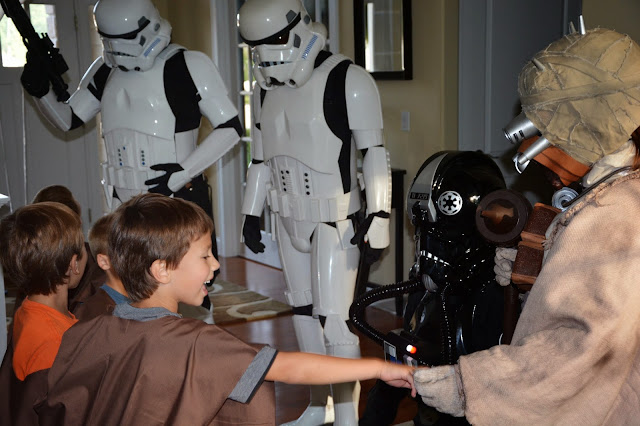 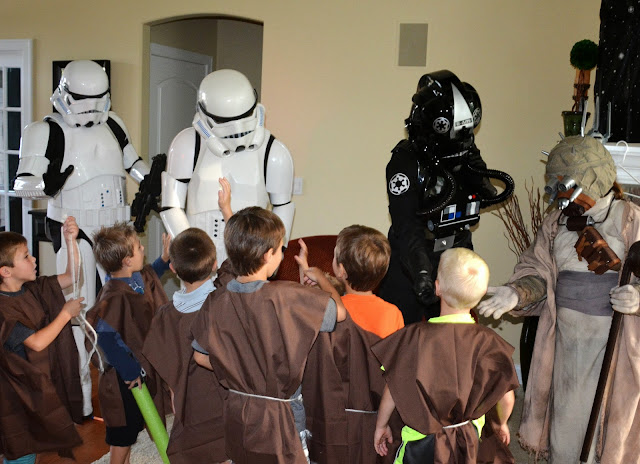 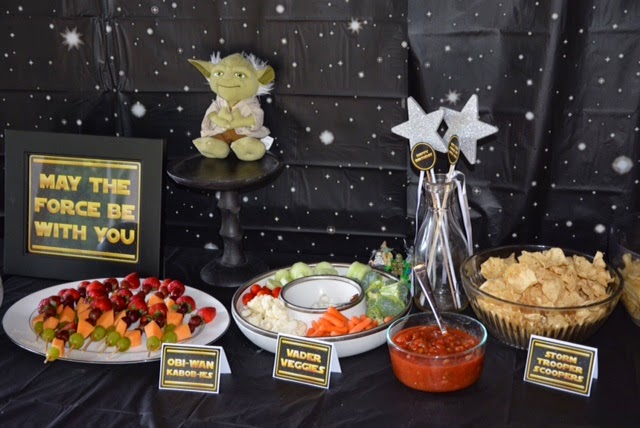 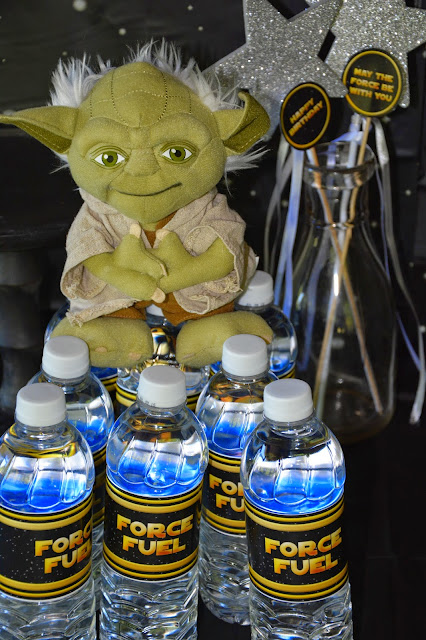 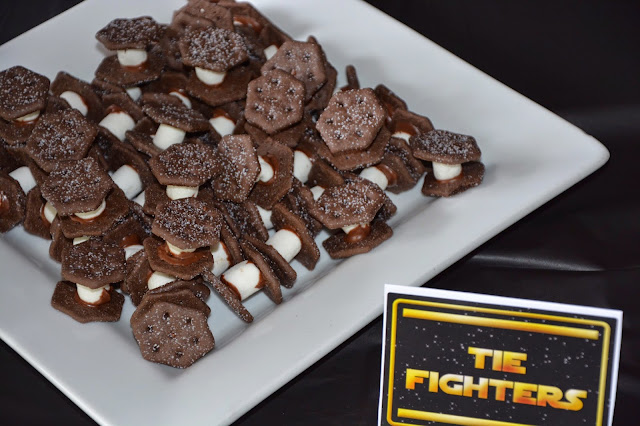 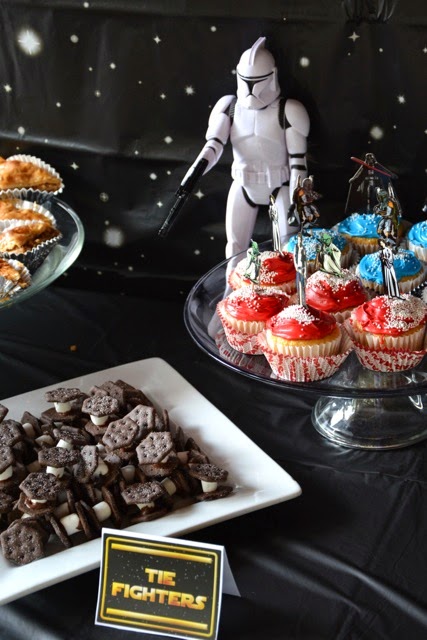 After cupcakes and presents we put on the outdoor movie and let the Jedi run around and burn off some energy before returning home after an eventful evening under the stars.

This was certainly the most fun I have ever had planning and hosting a party, but the highlight of my night was both boys giving me a huge hug saying this was the best day ever and asking if we could do it again! 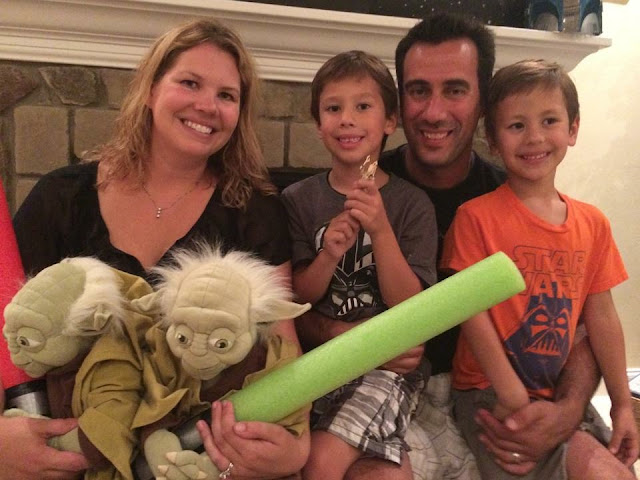 To see more of my party ideas, home decorating, favorite recipes, twin activities x 2, and all things
"Mrs.Party Planner" please check me out on facebook and "like" the page. New blog posts will appear in your news feed.You can also follow me on www.bloglovin.com or on Instagram @ mrspartyplanner.